I came across this old Look And Learn Annual a little while ago, and decided to pick it up as it reminded me of my childhood. Living in a time where the future seemed so exciting, full of space flight and robots. The promise of Science Fiction becoming Science Fact. With no limitations. 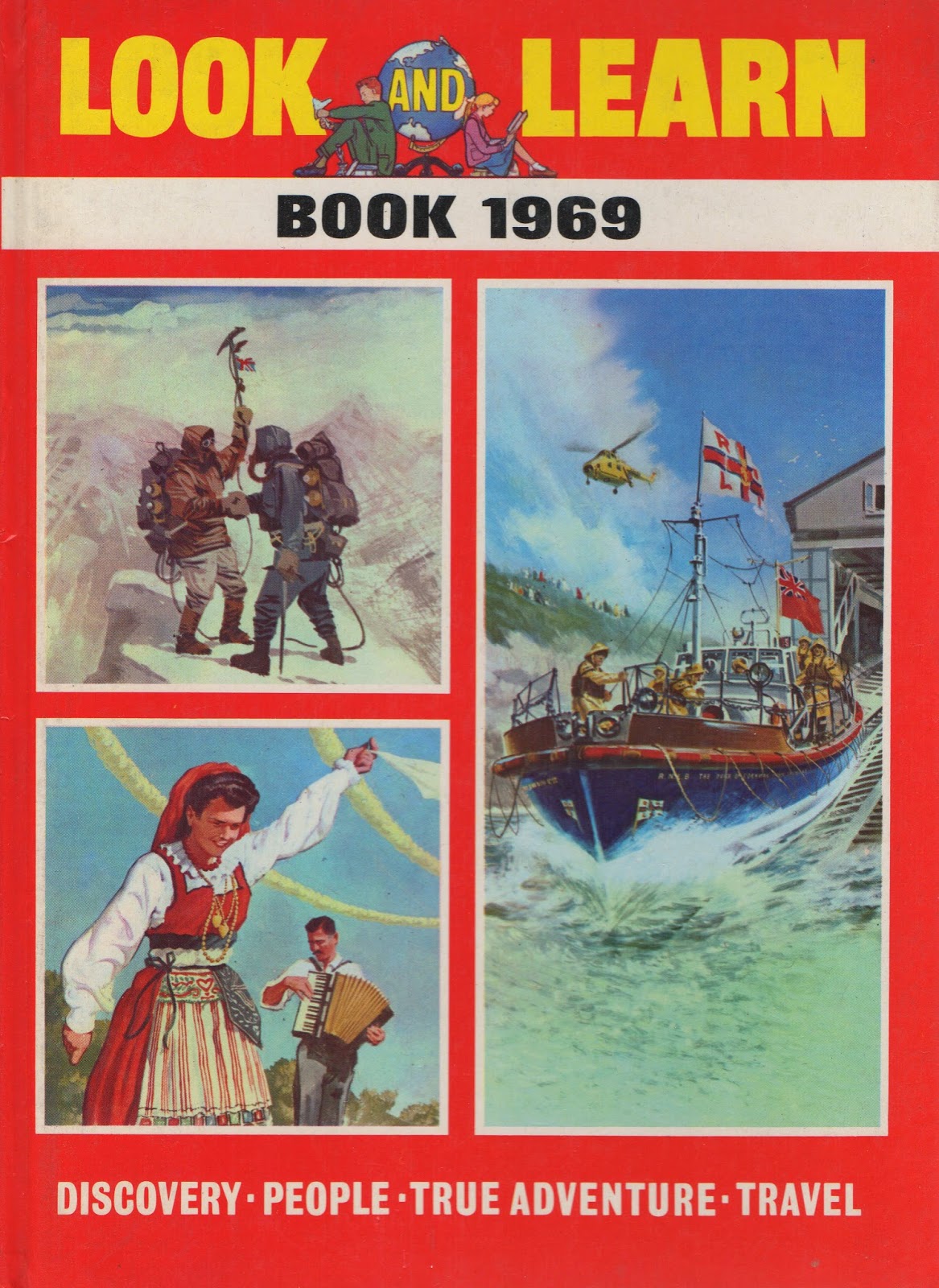 I'm not sure that I ever owned this particular book, but the message was a common one of the 60s and 70s.
I was sure that I'd possess my own Robot, a mechanical servant to help me with my day to day chores. A bit like Will Robinson, but in a flat in Sydenham rather than on some exotic planet out there somewhere. 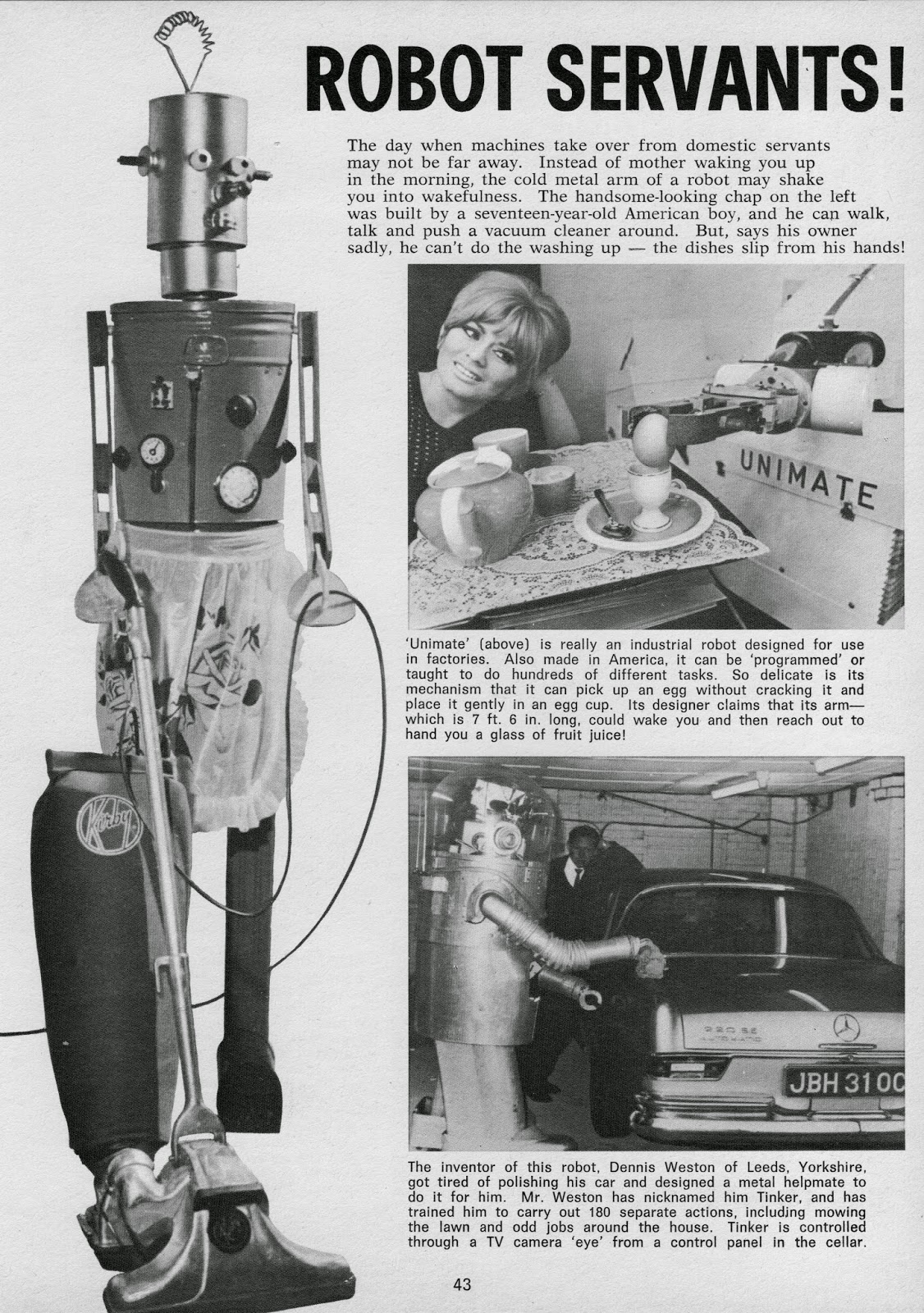 And then as I got older and I read books and watched films where the robots actually turn on their masters,  I accepted that it was probably for the best.
So, let the children of today take their turn. Let them see their dreams of robot servants turn to worry about robot masters.
I think it's a circle of life thing.
Posted by Dave West at 14:23 No comments:

Email ThisBlogThis!Share to TwitterShare to FacebookShare to Pinterest
Labels: 1960s, 1969, Look And Learn

I met Stephen Moore at the Memorabilia and MCM event in Birmingham a couple of weeks ago. For me he will always be THE voice of Marvin and I still don;t get why they use Alan Rickman in the movie, but then again the movie wasn't as good as the TV show or the Radio shows, so I guess it's appropriate. 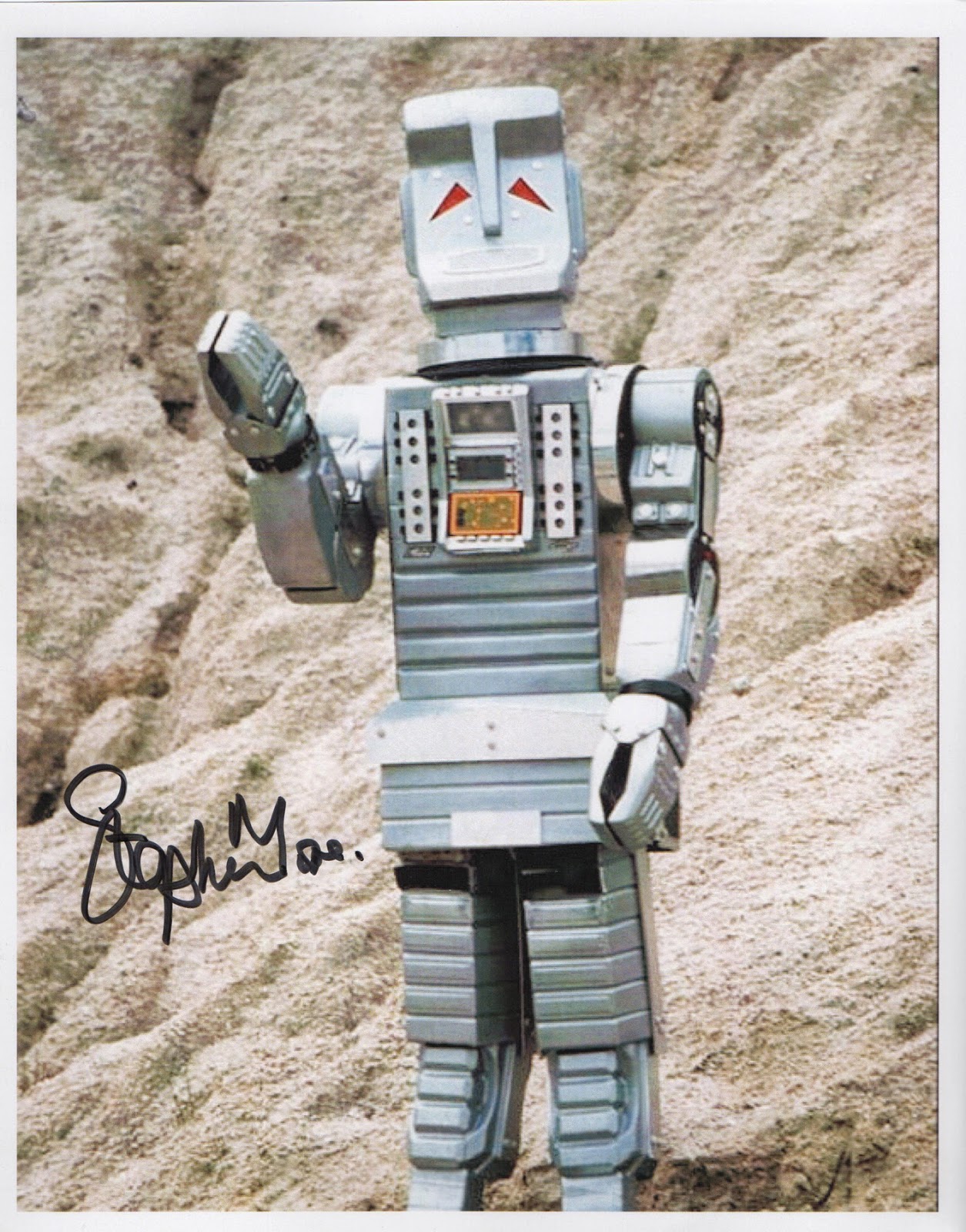 As you'd expect, Stephen Moore is a very genuinely nice bloke and only to happy to humour an old fan of Hitchhiker's Guide To The Galaxy for a few minutes.
Posted by Dave West at 04:30 No comments:

The Terminator by Kev Crossley

I met Kev Crossley at a few conventions between 2000 and 2005, and really enjoyed his interpretation of classic robots. As he was always so ready and willing to turn out these great little convention sketches I decided it only fair to get a real, full on, commission piece.
I asked for his version of The Terminator, and that's what I got. 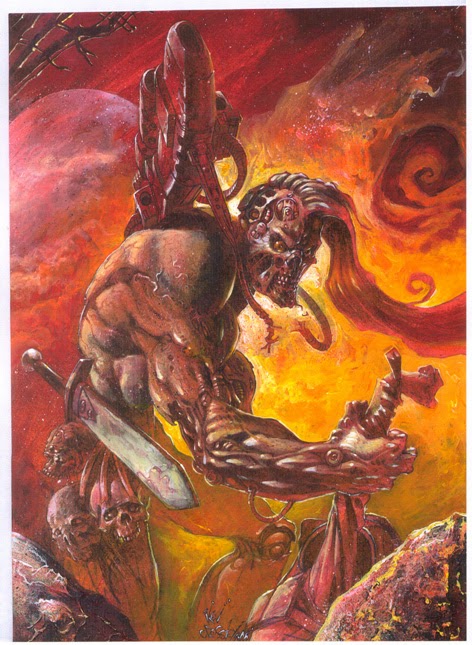 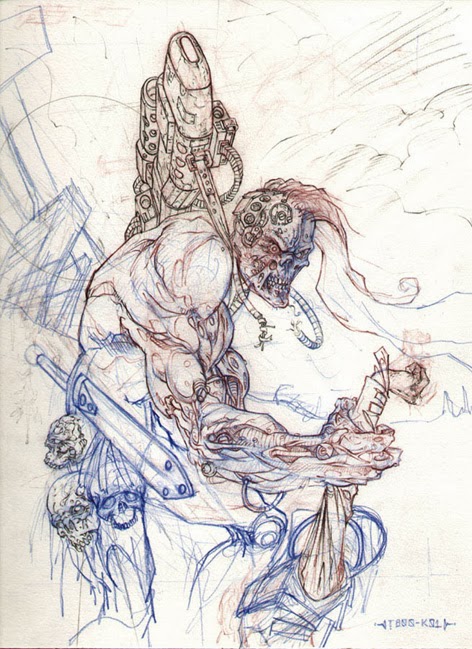 The Juggernaut ... from Hurricane Annual 1968

I spotted a cover to a Hurricane Annual that rang memory bells and picking it up flicked through the pages to discover a story that I rang those memory bells a second time. It featured a massive robot, indeed a Juggernaut, from Planet Z.
This issue is only two years before that one, and the artwork is painted, and therefore the robot is not quite so detailed, but the basic ingredients are all there. 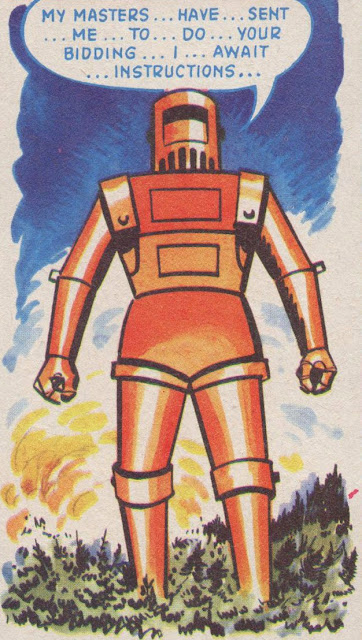 The story is pretty straight forward, as they always tended to be, with the military dictator being very definitely the bad guy, and the heroes, Doctor Dan Morgan and his assistant Joe Dodge, having no concerns when calling down the mighty Juggernaut from Planet Z to deal with him.

There is no mention of where exactly Planet Z is or why they should care to help, but it can't be that far away as the robot arrives pretty soon.
The nice twist here is that the robot's controls are taken over by the bad guys and so the Juggernaut starts to attack the soldiers of the tiny state of Alkazia. 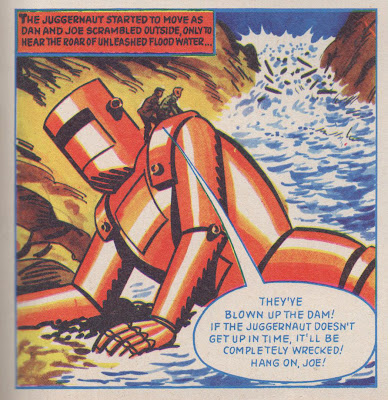 And the tide is quickly turned. 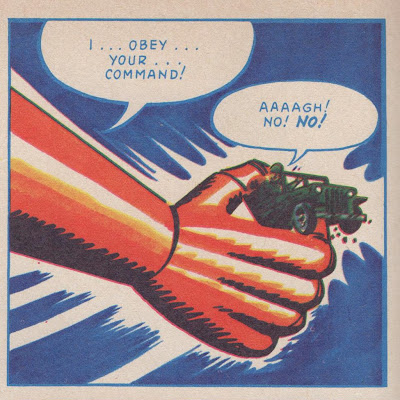 I must say that I was a little shocked when... 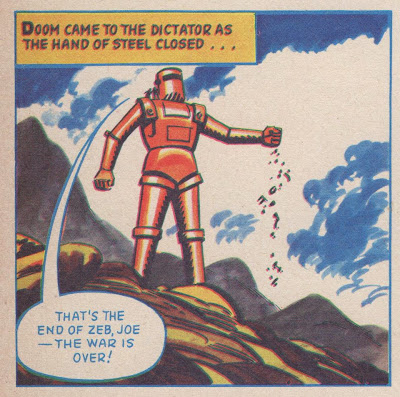 General Zeb, the bad guy, was very quickly disposed of.
Still, it all turned out pretty well, the tiny state of Alkazia was returned to the happy province it had been, the Juggernaut had saved the day, the two heroes had (through the Juggernaut) saved the day and their reputations and the rare material called Alkazium (vital to the world's space rocket programmes) remained available for exploitation by the powers of the world. 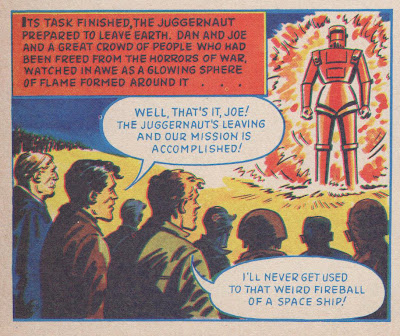 There are strong similarities between this and the Robot Archie stories, the major difference (apart from the size of the robot) seeming to be that he is from a different planet. I wonder if other tales tell us more about Planet Z and its intentions towards the Earth.
It would be an interesting angle to take on this but I doubt it happened. 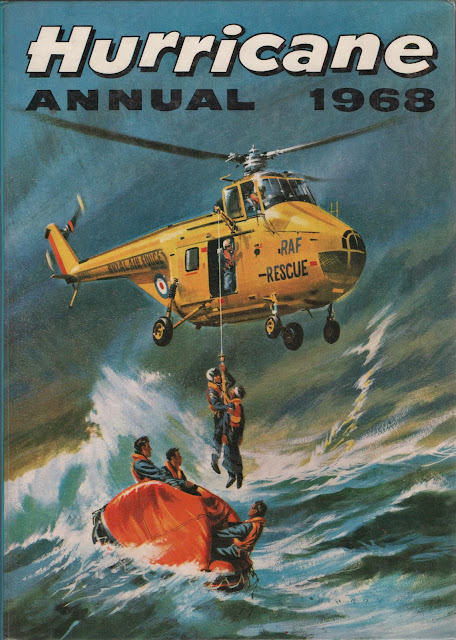 Robby The Robot by Ramon Perez. 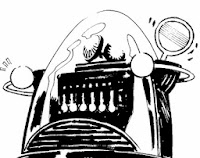 At this year's Thought Bubble comic convention in Leeds, I came across Ramon Perez sat at a table busy working on a commission. I didn't recognize him and he didn't have his name visible anywhere. So I asked him who he was and what he'd worked on.
'Ramon Perez', he politely responded, 'I'm currently working on the X-Men and Wolverine but I also illustrated A Tale Of Sand'.
I actually have a copy of A Tale of Sand, it's based on a film script by Jim Henson that never saw a camera's lens. I remembered being struck by how fluid the artwork on that book was and so promptly asked him for a robot commission.
He asked what robot I wanted, and I said that I'd happily leave that up to him.
He suggested I come back tomorrow.
Which I did, and was pleased to collect the image of Robby the Robot, from the classic 1956 movie Forbidden Planet. 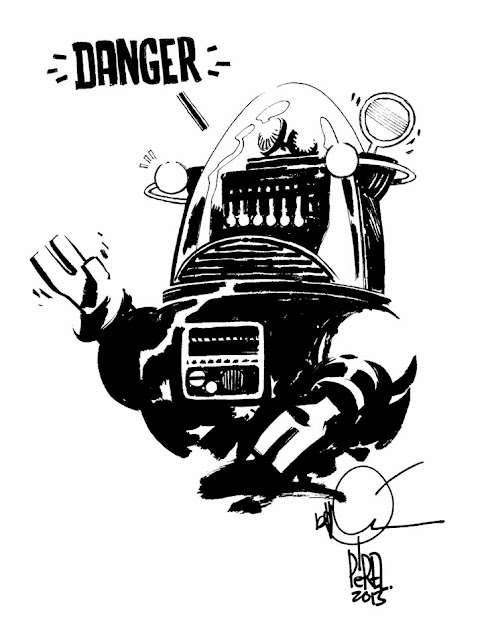 Very nice indeed.
When I collected this I took the opportunity to get Ramon to sign my copy of A Tale Of Sand, of course.
Posted by Dave West at 12:13 No comments:

Email ThisBlogThis!Share to TwitterShare to FacebookShare to Pinterest
Labels: A Tale Of Sand, Forbidden Planet, Ramon Perez, Robby The Robot, Tale Of Sand 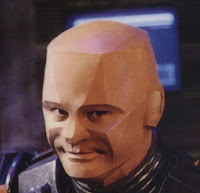 I met Robert Llewellyn last weekend at the Thought Bubble comic convention in Leeds. His main reason for being there was to promote his books, yep, he's a science fiction writer when he's not on TV. He came across as a genuinely nice bloke, and I picked up a copy of the first in his trilogy of books, 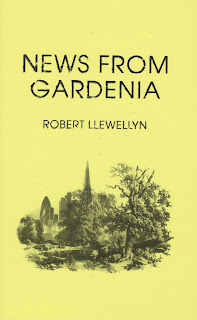 It sounded an interesting concept where his trilogy explored the idea of what would happen if something significant in the world we know was the complete opposite.
Free with every copy of his book, but not the reason I bought it honest, was a signed photo of him as Kryten. 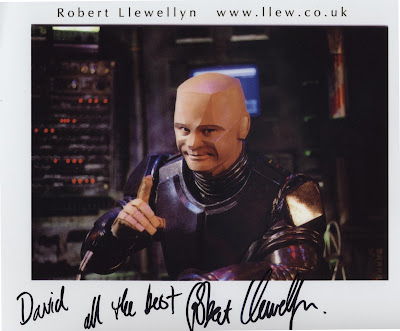 Still one of my favourite Sci-Fi characters.
(Note - you should check out Robert's blog... very interesting stuff).
Posted by Dave West at 04:19 No comments: 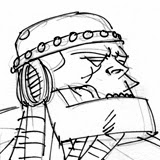 Robot Man is Clifford "Cliff" Steele a human mind in a robot body, and DC hero who is part of the strange superhero team that is Doom Patrol.He has appeared in all versions of the Doom Patrol comics, although his powers have varied a little along the way, and I'm not sure if his human brain wasn't replaced by a CPU at one point.
A great design though and a great character who had to constantly fight the depression that was caused by him living in a metal body.
Duncan Fegredo is one of the nicest comicbook artists on the Con circuit. He always seems to be enjoying himself, regardless of the daunting queue at his table, and his talent has recently landed him the job of bringing Hellboy to the comic page, which is the highest praise.
I got this quick convention sketch back in 2000. 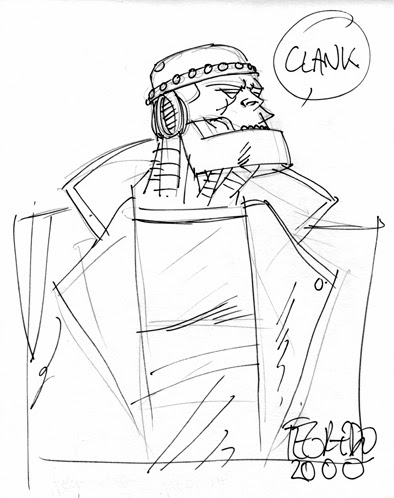 What is Robots Assemble ?

I've always been a fan of robots. From my earliest memories of toys and TV programmes like 'Lost In Space' I've been hooked. Hooked by the thought that they are programmed to do specific things and to behave in specific ways. Hooked by the fact that they often as not break free of this programming. Hooked by their varied designs. Yep. I love robots and a while back I created a website called Robots Assemble and collected Robot sketches and commissions from comic book artists. It's been a while and my collection hasn't really grown much in recent years as I've been busy creating comics myself, but I always intended to get it all going again and so here it is.
I'll add images and text as often as I can, and I think I'll start collecting robot sketches again ... Hope you enjoy what you see and it inspires you to visit comic conventions and start your own collections.